Old photos are asking for someone to pay attention. They say, “We existed”.

Happy Father’s Day with a photo I paid a great deal of attention to years ago of my Dad. He and my mother were on their honeymoon and sailing from New York to go to Europe on what was billed then and I still think was the most beautiful ocean liner ever to sail: The French Liner, “Normandie”.

The photos I had from this album did not have the life preserver with the ship’s name clear enough to read in the original photo. Nor was the Statue of Liberty visible on the photo with my father. So, I combined several photos.

But, the video below shows it was not immediately successful. Ultimately, the final product is on my bureau on a little stand. He would love that his ship and his image are together in memory and heart.

Restoring old photographs is a way to pay attention, to celebrate life, and actually, not just remind you of someone who existed in the past, but truly just reflect their continuing presence. He died in 1989. But, I am currently working on designing fabric from some of his photos of the ship itself and I can safely say he would lose his proud papa mind (in a good way) at this thought.

I already designed fabric from his photos of our family trip on the Queen Mary and sewed them into zippered bags and pillows. That is my brother, Tim, 14 years old standing under the anchor. 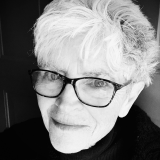 Welcome to My Bunker. Please Ring the Doorbell

Listen to Pat’s Podcast: Voices From My Bunker

I am trying to "face things" as James Baldwin suggested. "Not everything that is faced can be changed, but nothing can be changed until it is faced.” Turns out, it's not so easy to look in the mirror and retain a sense of humor. But, I try.

Ring My Bunker Doorbell / Thanks to Jeff Hale

Listen to Pat’s Podcast “Voices from My Bunker”